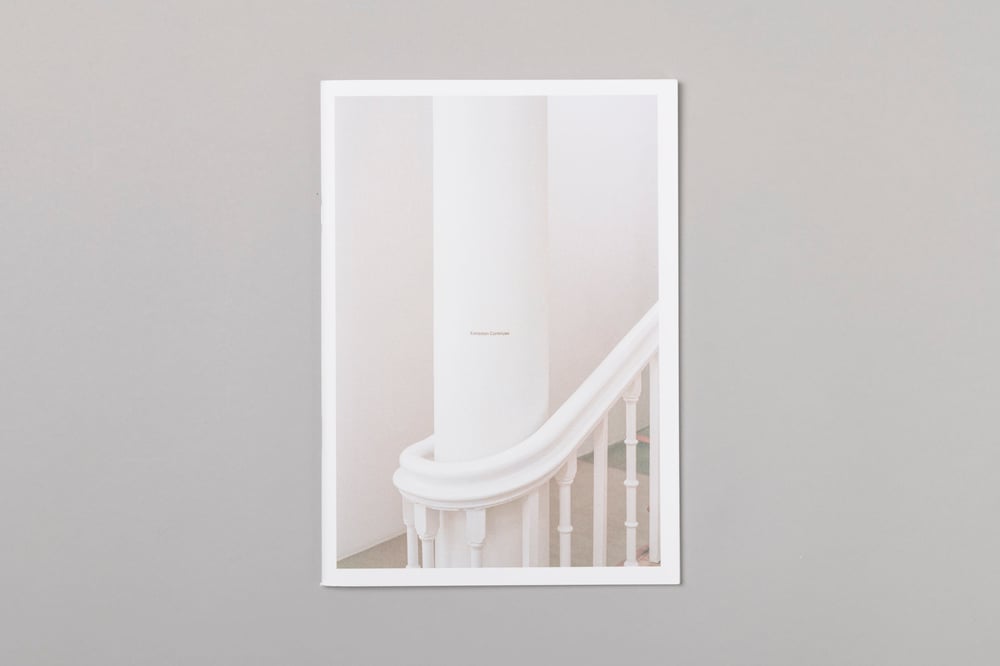 Polly Brown & Philippe Karrer
‘Performances, The finality of fixing something by giving it a name.’
Spheres Projects

BOOK DESCRIPTION
This collaboration between photographer Polly Brown and graphic designer Philippe Karrer documents a series of ‘performances’, interventions and observations that took place in a number of commercial and public galleries in London throughout the summer of 2017. Using the contemporary art gallery as a stage for a series of irreverent disruptions claimed as performances, Brown and Karrer subtly point at and play with the functioning motifs of gallery infrastructure – Endless Helvetica wayfinding signage, blinking overhead CCTV, a discarded press release, unclipped velvet rope partitions, the bored invigilator and the ubiquitous imposing gallery ‘welcome’ desk.

A text composed using sentences from the featured galleries’ press releases accompanies the photographic series. It is created using the cut-up-method, a technique pioneered by the Dadaists and writer William S. Burroughs.

“Brown’s project riffs upon the photographic documentation of performance art, each image captioned as though it were a commissioned work in and of itself. A discarded pair of headphones, either found or placed there by the photographer, lie underneath an explicit Wolfgang Tillmans on show at Tate Modern. At Marian Goodman, the ubiquitious Helvetica gallery signage directs a visitor to nowhere in particular – another of Brown’s interventions, perhaps. And at Hauser & Wirth, the snapshot of a bored invigilator caught scrolling through his phone, is wryly named Sitting, Durational performance (Variation on position). Released as a photo-book to coincide with Frieze London 2017, a set of accompanying texts have been constructed from the cut-up press releases outlining the exhibitions in which each photograph was taken. Affectionately poking fun at the verbosity of ‘art speak’ – and contemporary art’s propensity for the ridiculous – Brown’s latest work is a welcome addition to her roster.” Source: Hannah Tindle for AnOther