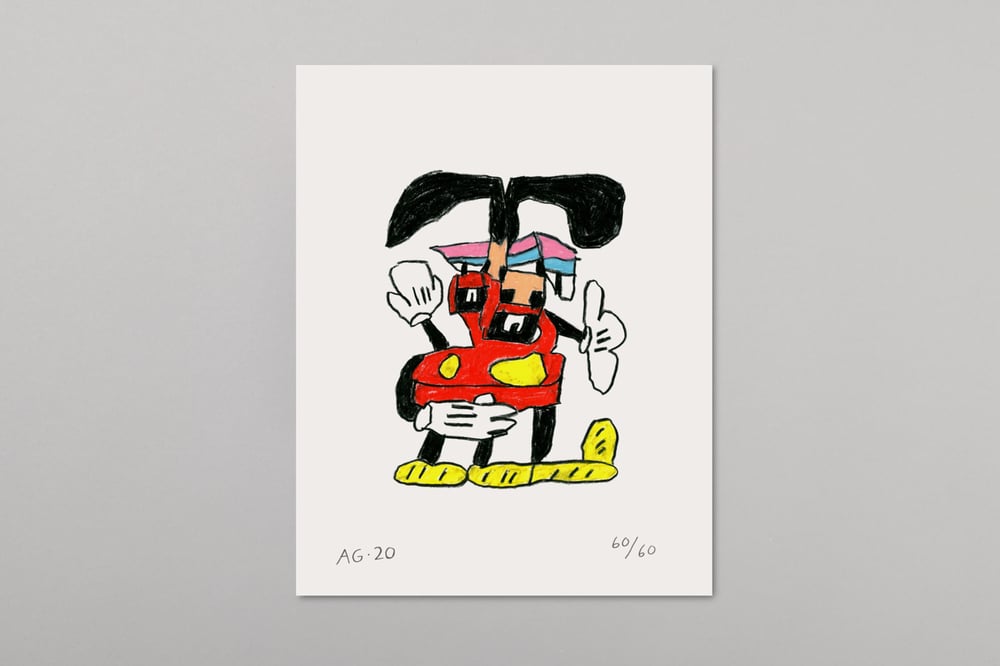 Laughter, whether individual, collective or involuntary, can often be seen as the only sensible and helpful reaction to the confrontation of the absurdities of our everyday reality. Because of its calming and euphoric side effects on our brain, laughter has long been a peaceful and effective tool of inner rebellion against oppressive structures. The comedian, as a contemporary variant of the medieval jester – ultimately just another term for artist – is by nature a jolly spirit, free in their forms of expression, including laughter, which embodies the social task of questioning systems of domination and oppression. Adam Green unmistakably takes the features of his comic drawing from what is probably the biggest international icon of pop culture. His appropriation of Mickey Mouse, which he has further taken apart, turned upside down and reassembled in a cubist manner, functions as an alter ego and at the same time plays the tragic key figure in one of the central scenes in his surreal-dystopian poem “MDVL: 1’000 Years of Dark Ages”. Green’s own comedy refers to the schizophrenic nature of human existence in the age of omnipresent digital surveillance mechanisms: being a ridiculous character within a role play ruled by others. The only remaining option is to take on the role of the jester, which means becoming “a liar in all dimensions”. The drawing is published as a limited edition, accompanying the publication of Adam Green by Spheres Projects. Text by Alice Wilke.

NOTE:
Due to the Covid-19 situation shipping may take longer than expected.